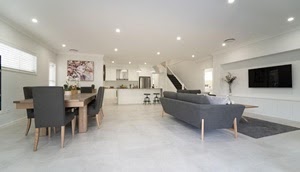 Supply of land for housing in the greater Sydney region is decreasing, even in the outer ring suburbs. As a consequence, lot sizes in Sydney have decreased by 24 per cent on average in just eight years.

In response to this trend, home builder Beechwood Homes is taking a number of popular designs and modified them to fit smaller land sizes.

The latest data from the Urban Development Institute of Australia has revealed greenfield median lot sizes have dropped to an all-time low – with Sydney falling from an average of 520 square metres per block in 2009 to 379 square metres in 2018.

And while the average lot size has decreased, buyers are paying much more for less because over the same time period average lot sizes in Sydney have increased 73 per cent from $275,000 to $476,000.

At Beechwood we’re modifying our most popular single-storey designs to incorporate a loft-style second storey that uses the roof-space rather than a full second level. By using the roof space instead of building a full second story we can make the home more affordable and still maintain the space required for Sydney families.

The popular Barossa with Loft

In our new designs, the upper storey Loft area, still has a standard ceiling height of 2.4 metres. For example, our popular Barossa design now has over 50m2 of upper-level space to accommodate two bedrooms, a study and a large bathroom complete with a bath.

The Barossa with Loft display home was recently unveiled at the HomeWorld Display Village at Marsden Park and is already providing popular with families. The four-bedroom, two-bathroom Barossa with Loft design has a total area of 282m2, including the two-car garage, outdoor living (Terrazza) and front patio, and is suitable for 14-metre width blocks.

Our customers tell us they want a minimum of four bedrooms for their families and visitors.

Media and theatre rooms are also popular, so most of our designs accommodate a separate area for watching television, playing computer games and more.

Click here for more on our Barossa with Loft, or visit the new HomeWorld Marsden Park at Allott Street, Marsden Park or call our Sales team on (02) 9765 0299. Beechwood is also working on modifying other popular designs to fit smaller land sizes.

The origins of loft living

Lofts originated in Paris in the mid-19th Century as artists’ workshops. The oversized paintings of the time required expansive high-ceilinged studios which led to the first lofts.

Lofts were later popularised in the United States as early as the 1940s, where some of New York's abandoned loft spaces in SoHo were occupied by starving artists. By the 1970s, SoHo had full-floor loft spaces that were being renovated and transformed from commercial to residential properties.

This trend spread from New York's SoHo to other urban areas around the US and beyond over the next 20 years.

Inspiration for the Beechwood loft designs

At Beechwood we’ve taken inspiration from the original lofts and are re-jigging the layout of some of our popular single-storey existing designs to use the underutilised roof space. This way, the homeowner gets the same amount of rooms and space but can fit their new house on a smaller piece of land.

Click here for more on our Barossa with Loft, or visit the new HomeWorld Marsden Park at Allott Street, Marsden Park or call our Sales team on (02) 9765 0299. Beechwood is also working on modifying other popular designs to fit smaller land sizes.